HEINEKEN Ireland Ahead on Sustainability Targets

HEINEKEN Ireland Ahead on Sustainability Targets 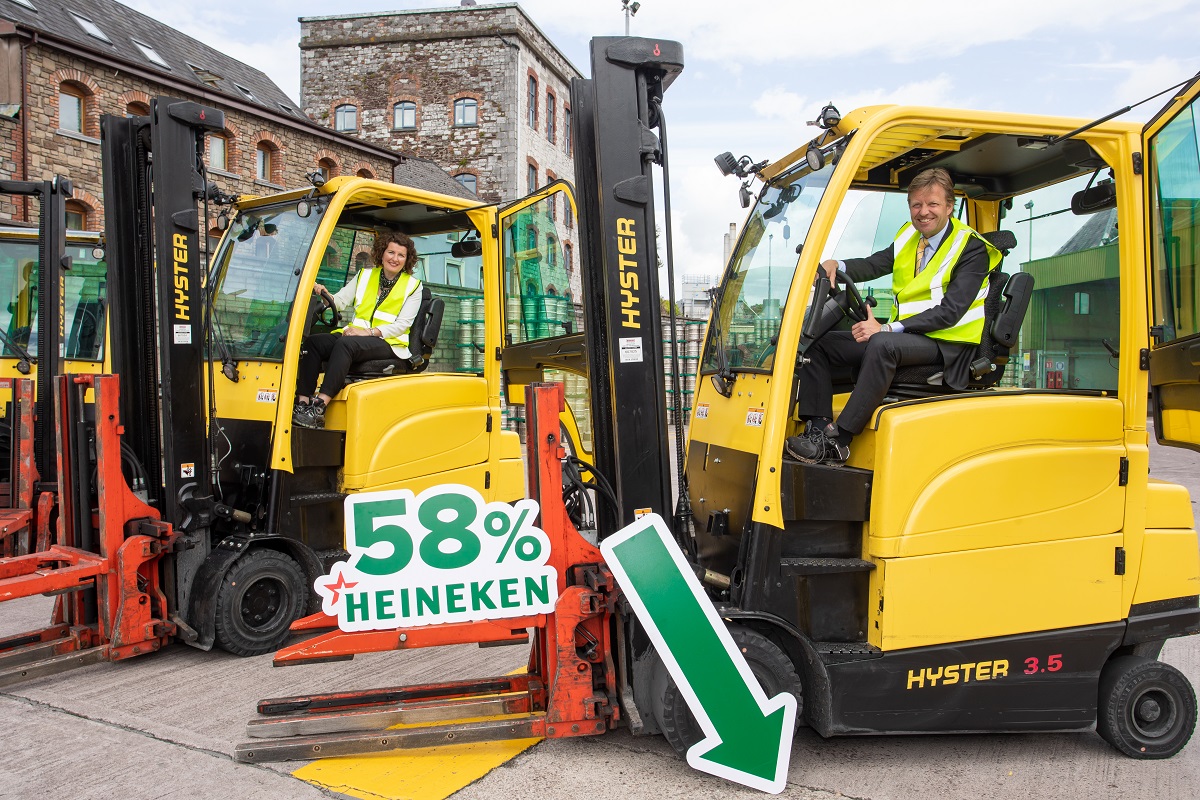 Thursday, 20th June 2019: HEINEKEN Ireland today published its 2018 Sustainability Report which saw the brewer achieve a 58% reduction in CO2 production since 2008, far exceeding its own 20% target. This achievement underscores its 10 year commitment to be a sustainable and green brewer under its global sustainability strategy, Brewing a Better World.

In 2018, as part of its sustainability plans, HEINEKEN focused on cutting emissions produced by electricity at its 163 year-old Lady’s Well Brewery in the heart of Cork City. Three key electricity-themed projects delivered significant carbon savings at the facility.

Production:  In HEINEKEN Ireland, 100% of the electricity used to power the production of its beers and ciders now comes from a green, zero-emissions wind-powered source, the Raheen wind farm in Mayo.

Logistics: Replacing its total forklift fleet with new electrically powered forklift trucks at the brewery in the heart of Cork City has delivered a reduction in carbon footprint of 112 tonnes per year. This is the equivalent of taking almost 10 family cars off the road.  In addition, the initiative also increased on site safety and noise reduction.

Lighting: The installation of an LED energy efficient lighting system throughout the site reduced energy consumption by more than 400,000 KwH, the equivalent of fully powering 45 family homes for a year. It has also delivered significant safety benefits, in ensuring clear visibility in previously poorly-lit parts of the brewery.

Maarten Schuurman, Managing Director of HEINEKEN Ireland said: “Since taking up my role as Managing Director of HEINEKEN Ireland last year, I have been struck by the degree to which sustainability is a top priority across all aspects of the business. I was very pleased to see the results achieved from this sustainability mindset, and arising actions, being recognised by Business in the Community Ireland in awarding us the Business Working Responsibly Mark, making us the first drinks company to achieve it.

Our Sustainability Report this year demonstrates that our global Brewing a Better World sustainability strategy is delivering really meaningful results in Ireland when it comes to our six key sustainability focus areas. Last November, we took the strategic decision to sign Business in the Community’s Low Carbon Pledge, setting us on a path towards another truly significant carbon reduction by 2030. Our targets are ambitious and mean we have a lot to do; this year’s achievements show we have both the ability and momentum to meet and surpass our sustainability commitments.”

Barbara-Anne Richardson, HEINEKEN Ireland’s CSR and Communications Manager, said: “HEINEKEN is on a journey towards becoming a truly green brewer. This year’s sustainability report marks another significant step towards that ultimate goal. A focus on electricity – both on where we source it from and on what it powers for us – has been central to our recent sustainability success. All the electric power we use in the production of our beers and ciders now comes from Raheen wind farm.

The new electric forklift trucks on site have delivered multiple benefits in carbon and noise reduction. Similarly, our new LED lighting system has made significant energy savings and has also delivered safety benefits in ensuring clear visibility in previously poorly-lit parts of the brewery.”