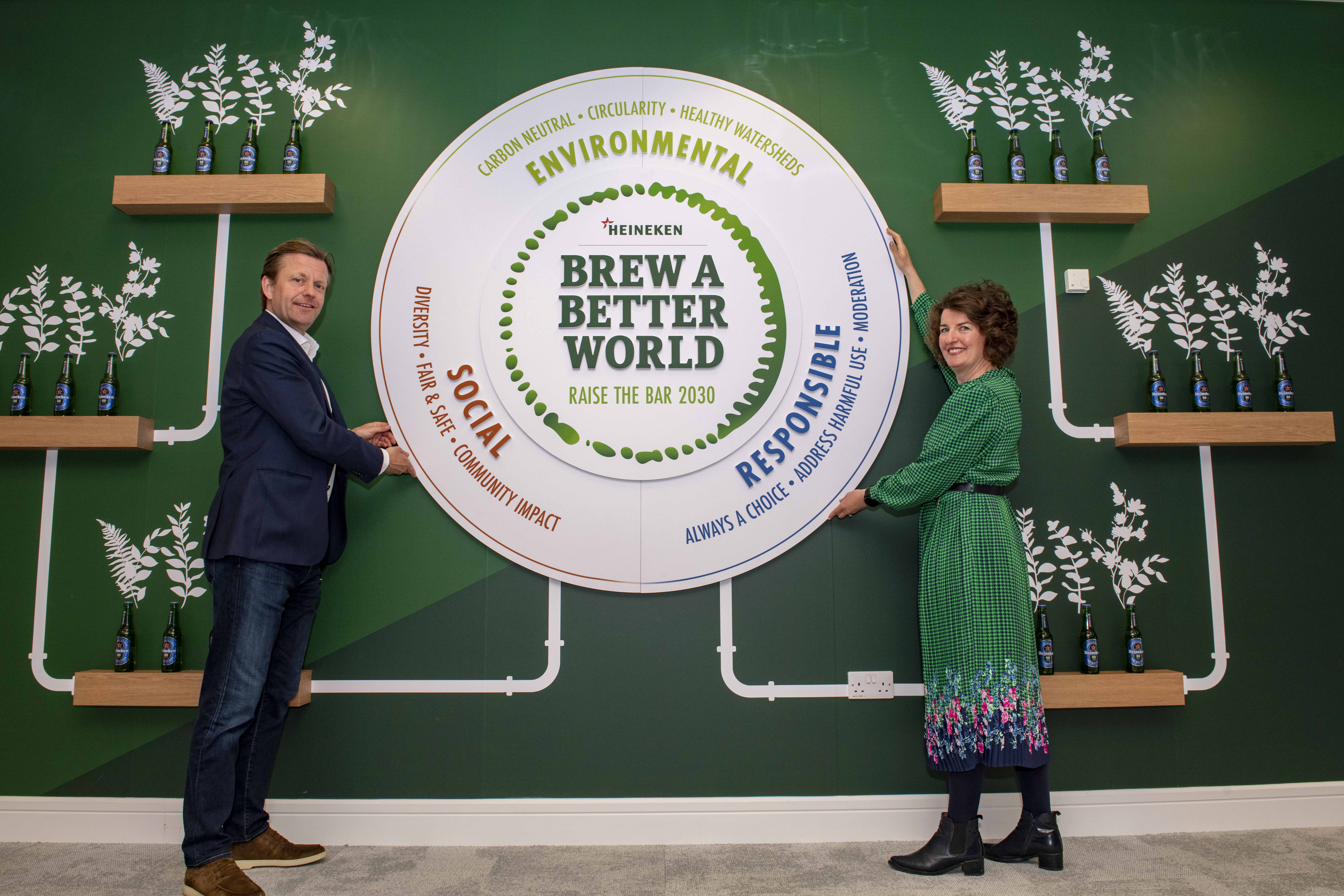 Thursday 31st March 2022: The fizz in HEINEKEN Ireland’s beers comes from recycled carbon dioxide which is created in the natural fermentation process and then captured and reused at the Cork brewery to carbonate its draught beer. The carbon dioxide reuse project is just one element of HEINEKEN Ireland’s broad commitment to sustainability across all facets of its operation, both in Ireland and globally.

HEINEKEN Ireland has today released its 2021 sustainability progress report, demonstrating the brewer’s commitment to continuing its environmental progress and its industry-leading ambitions for 2022 and beyond.

Despite the continued industry challenges presented by Covid-19, HEINEKEN Ireland has continued to showcase its strong commitment to creating a sustainable business; moving towards a circular economy through initiatives such as the reuse of by-products like carbon dioxide and grain dust and repurpose kegs of beer during lockdown.

Using recycled carbon dioxide for millions of pints of beer has helped make HEINEKEN’s Cork brewery 96% carbon dioxide self-sufficient. Working with industry partners, the brewer also plans to remove more than half a million single use plastic cups from events this summer through the introduction of a reusable plastic cup.

With the hospitality sector continuing to suffer lockdowns in 2021, HEINEKEN Ireland ensured no pints went to waste, continuing its efforts to repurpose kegs of beer – over 19 million pints in total across 2020 and 2021 – from the cellars of pubs in lockdown and turning it into energy and animal feed.

HEINEKEN Ireland has also continued to lead the way in moderation, funding dedicated Zero Zone spaces in retail outlets to help showcase no alcohol and low alcohol options for consumers. So far, the brewer has created over 1,100 Zero Zones in off licences and retailers across Ireland. The Zero Zones are used to showcase all no alcohol and low alcohol products, rather than just the HEINEKEN Ireland brands, which further underscores the brewer’s commitment to the promotion of moderation.

Building on the widespread availability of bottled Heineken® 0.0%, the refreshing draught pint 0.0 is also available in over 2,200 bars and restaurants across Ireland, with continued expansion to a further 700 outlets this year, giving consumers real choice.

Key 2021 highlights across the three pillars of HEINEKEN Ireland’s Brew a Better World sustainability strategy include:

Due to ongoing investments the HEINEKEN Ireland brewery is 96% self-sufficient in CO₂, and at full production, the site recaptures over 2,000 tonnes of CO₂ from the fermentation process for reuse in brewing. This green CO₂ is recycled and reused in the production process, in areas such as the carbonisation of its beer, pressurising kegs, and pressurising vessels.

In addition to operating a Zero Waste to Landfill site from its Cork brewery, all by-products from the brewing process (e.g., spent grain and grain dust) are reused and recycled, with 30 tonnes of waste being repurposed per year as animal feed.

HEINEKEN Ireland has achieved a 28% reduction in emissions from production since 2018 and aims to achieve zero emissions from its brewery by 2030. It is also the first global brewer to pledge carbon neutrality in the full value chain by 2040.

HEINEKEN Ireland has removed over four million pieces of plastic packaging and removed PET plastic bottles from its entire product portfolio. Reusable cups were successfully tested at events in 2020/21, with a plan in place to remove more than half a million single use plastic cups from events this summer.

HEINEKEN Ireland has continued to lead the market in responsible consumption, moderation, and low/no alcohol options. So far, it has created over 1,100 Zero Zones in Irish off licences and retailers that help showcase no alcohol and low alcohol options for consumers.

Heineken® 0.0% is also available in over 2,200 bars and restaurants in Ireland. HEINEKEN Ireland is planning to add a further 700 outlets this year, giving consumers additional choice.

All Heineken® brand campaigns feature a strong Heineken® 0.0% presence, ensuring that consumers have a choice of 0.0 no matter what the occasion. In addition to this, 10% of Heineken® brand media spend is dedicated to a standalone campaign promoting responsible consumption behaviour and encouraging healthier drinking habits every year. In 2021, this campaign reached over 1 million people across Ireland.

Currently, 33% of HEINEKEN Ireland Senior Leaders are female, with a commitment to reach 50% by 2024.

In 2021, HEINEKEN Ireland launched Fresh Beginnings, a €10m stimulus programme, which was the largest in its 165-year history, to support the hospitality sector re-opening.

HEINEKEN Ireland is committed to local suppliers, with 100% of its barley coming from Irish farmers. In total, it works with over 300 Irish suppliers, delivering an annual spend of €54m to the Irish economy.

“While 2021 continued to pose significant challenges for the drinks and hospitality industry, at HEINEKEN Ireland we are incredibly proud that we have continued to make substantial progress in our sustainability initiatives across the business and in setting ambitious environmental goals for the future. We are delighted to report that we succeeded in our 2021 ambition to remove over four million pieces of plastic packaging from our portfolio and are working towards removing half a million single use plastic cups from a range of events this summer. Guided by our award-winning Brewing a Better World sustainability strategy, at HEINEKEN Ireland we are committed to industry leading sustainability and moving towards a circular economy. From removing plastic, to recycling carbon dioxide and leading the market in moderation, we are incredibly proud of our 2021 results and look forward to raising our ambitions even further in 2022 and beyond.”

Rooted in Cork for 165 years, HEINEKEN Ireland is a leading sustainable business in Ireland and has been transparently reporting its sustainability results since 2010. HEINEKEN Ireland is the first and currently only drinks company in Ireland to hold the independently audited Business Working Responsibly Mark, under NSAI ISO 26100.

The brewer was recently announced as Ireland’s Overall Winner of the 2021 Green Food and Beverage Producer Awards.  HEINEKEN Ireland was also awarded Bord Bia’s Sustainable Impact Award in 2019 and a REPAK Bronze Award for commitments to reduce plastic from across the business in 2020.  HEINEKEN Ireland’s Global 2030 targets have been validated by the Science Based Targets initiative (SBTi).

Photo Caption: Maarten Schuurman, MD, and Barbara-Anne Richardson, Sustainability Manager, HEINEKEN Ireland, are pictured announcing the 2021 sustainability results with a 28% reduction in emissions towards its target of zero emissions in production by 2030. As part of its commitment to circularity, the brewer is putting the fizz into its pints in Ireland using recycled carbon dioxide as well as rolling out half a million reusable plastics cups at festivals this year and removing 4 million pieces of plastic from its packaging.